It’s been yet another busy week here, but that just means I have a lot to fill you in on. From our trip to York last weekend, to the refreshers fair this week, to more crazy nightlife stories, Newcastle has definitely been a roller coaster so far.

Of course there are classes, but those are not fun to talk about. I finally have my schedule down and have found the quickest, most direct ways to get to them finally. The main campus isn’t that big, but there are dozens of different paths to take to get from point A to point B. We’ve started utilising the bridge that goes from our flat to the main campus. It’s an escape from the wind and rain on bad weather days, which surprisingly don’t happen too often.

I had to go shopping for sweaters. It seemed when I packed that I had a lot of clothes, but when unpacking, I realised I didn’t actually have that much. I’m sure my mother would not agree with that statement, but if I had to chose between getting sick and a 6 pound sweatshirt, I’ll take the financial loss. In an effort to save money, Joyce has created a monthly budget. Since I can’t bring myself to do that, I decided instead to start hiring lunch to class. I have a 2 hour break between classes (on the 2 days that I actually have class) so I found a student lounge to sit in, do work, listen to music, and enjoy a sandwich I packed.

The first few days, my flatmate and I were way to tired to do anything but sleep from 7:30pm (literally) until it was time to get up the next morning. After getting over that somewhat and wanting to see what everyone else in the group had been talking about, we finally made our way out to see the town past 8pm.

Our first night, we ended up not getting in anywhere because our friend forgot her ID. Although we walked around for about an hour, we got to find where things were, which was somewhat helpful.

The second night out was amazing. We four this place called Tup Tup, which specialises in hip hop and R&B on Thursdays. It was incredibly crowded, workers were twerking on the ledge, and a private party doused the crowd with a  champaign shower. For only 5 pounds, we definitely have found our new Thursday night club spot.

On Friday, we decided to go to Sinners, a place everyone is comparing to Craig’s, a bar back home. We walked in and stayed for about 2 and half minutes before we decided that it was sweaty, dirty, and everyone around us was drunk out of their minds. We left that place and decided to never look back.

After, we decided to try out every place that was free that night, so we knew whether or not to go back. Everywhere is relatively close to each other, and with our gloves and combat boots on, we trekked from place to place, stayed for about 2 songs, then left. We saw people getting handcuffed, drunk girls in heels hitting the cobblestone, and I was asked if I was an angel who fell from the sky.

Saturday was the BEST night I have had probably in all of my college nights. We went to Riverside, just  4 pound cab ride away. It was the first time we had not walked anywhere, and with all of the damage from the week done, I don’t know that I would have made it in heels. After meeting some Scottish people, and some other randoms that danced with my flatmate and I to random songs including an Aint No Mountain High Enough remix, it was finally 3am, and the club closed. We were on our way out when someone took our cab, so we decided to sit outside in the building and wait for another to come, which someone also took. About an hour later, it finally arrived, but not before we made some intoxicated friends from Manchester. They loved our accents, and their trip to the states, which included visiting Miami, California, and some TV show house. They tried to convince us that Newcastle sucked, but so far, I am loving it, despite the cold and foot pain.

Of course, as responsible young adults, we ventured out again tonight, but this time to find our classes, which start in less than 12 hours. Here are a few photos of our self guided campus tour. 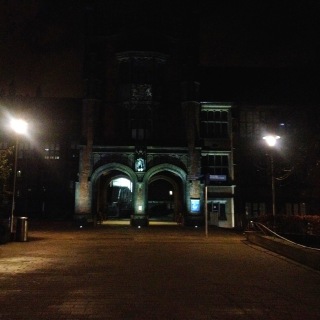