I’m back with another look into my apartment makeover. Since we last spoke, I have tried to rearrange my bedroom furniture (which was returned to its original arrangement a few hours later), but I also started the most ambitious project yet. Working from home has caused me to sit on the couch in the same spot for a months. I figured since I was officially signing on for year two, it would be time to be a real adult and get a table or desk that could give my couch a break.

While I do have a vanity, the thought of dragging it into the living room was a hard pass, and the thought of working from my bedroom was an even harder one. I started searching all types of sites, from Target to Wayfair, Home Depot, Overstock and FINALLY Ikea. I wanted a table that was tall enough for me to be able to stand at if I wanted, but that wasn’t going to overwhelm the remaining square footage I had to allocate to this table and chair set. I also wanted something that didn’t look complicated to put together, but big and sturdy enough that it wouldn’t break in the middle of a Zoom call. I eventually found a 41 inch table and chair set, designed for outside, but that checked off all of my boxes. A week later, I am now the proud amateur assembler of a real table, which I am currently sitting at while writing. Here’s how it went putting together the ÄPPLARÖ Bar Table and Stools from Ikea. 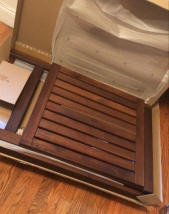 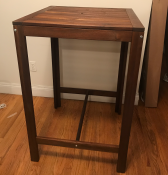 Overall, it probably took me about four hours with a one hour dinner break. The diagrams made it super easy to put together. No need to read real words, (not that there were any), just follow the pictures. My advice would be to lay out all of the nuts, screws and bolts first, grouping together the identical pieces before beginning. Make sure you have the right amounts and go from there. The directions are pretty clear, but when in doubt, follow your instincts. The pieces should fit and align and nothing should really be forced. I used an electric drill and a hand screw driver to finish the tightening job in some instances.

Not sure it’s the best place in the apartment to put the table yet, but I do have a nice view of the street and a direct hit of natural light sitting here.